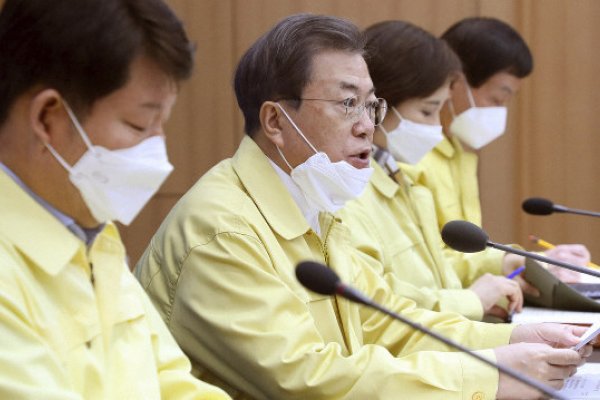 As one of the first countries heavily impacted by COVID 19, South Korea had to early adopt bold counter measures with some tangible results - number of new infections seems to have peaked on 3 March and is considerably down since then.  After some early criticism, the Korean government has generally received positive marks for its handling of the situation and is now being looked as a model for countries later in the infection cycle. With general elections scheduled for 15 April, President Moon's approval rates are at a 14 months high. GR Korea has compiled an analysis of the measures taken so far and their potential political impact.

As of 26 March, there have been 9,241 confirmed cases of COVID-19 in South Korea, with 131 deaths, 4,144 recovered and 5,684 in quarantine, according to the Korean Centres for Disease Control and Prevention (KCDC). Korea currently ranks eighth globally for the number of confirmed cases. Overall the rate of infection appears to have peaked on 3 March.

The first case of COVID-19 in Korea was confirmed on 20 January. The next month saw 30 new confirmed cases but the numbers escalated from 20 February, when the KCDC announced that a 61-year-old woman, “Patient 31”, was believed to have infected more than 43 people. She was a member of Shincheonji, a religious sect, who had attended services on consecutive weekends. This resulted in a concentration of cases in Daegu and North Gyeongsang Province and at Shincheonji churches across the country. There has been one other notable mass infection, at a call centre in the Guro-gu area of Seoul which infected over one hundred employees and their family members.

After some early criticism, the Korean government has generally received positive marks for its handling of the situation. To combat the outbreak, it has taken two key actions - active testing and thorough epidemiological investigation. As of 23 March, 338,036 people had been tested at selected medical and drive-through test centres. Epidemiological links have been found for 80.9% of cases; 19.1% are either under investigation or deemed sporadic. A supplementary budget totalling 11.7 trillion won ($9.6 billion) has been approved to provide financial support to affected companies and individuals, and a second package is expected.

On 22 March, the KCDC announced that the public must strictly comply with social distancing for 15 days, until 5 April, a period it believes to be crucial to defeat the COVID-19 outbreak. The KCDC urged the public to stay at home except for the need to purchase daily necessities, visit healthcare facilities, and commuting. The government will restrict the operation of certain public facilities which are at high risk of infection, or require strict adherence to guidelines for disinfection and ventilation, social distancing, and mask-wearing for those that must remain open. (for more details, total 11 pages report is attached)